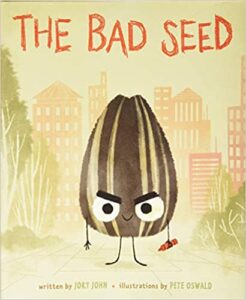 The Bad Seed by Jory John and Pete Oswald is suggested for children to read. There is a bad seed. A baaaaaaaad seed. How bad? Do you really want to know? Can a bad seed change his baaaaaaaad? Read this book with your children and find out. 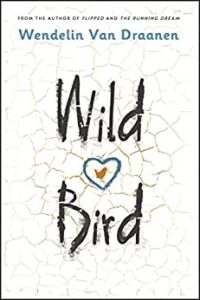 The adult and teen selection, Wild Bird, is from the award-winning author of The Running Dream and Flipped comes a remarkable portrait of a girl who has hit rock bottom but begins a climb back to herself at a wilderness survival camp.

3:47 a.m. That’s when they come for Wren Clemmens. She’s hustled out of her house and into a waiting car, then a plane, and then taken on a forced march into the desert. This is what happens to kids who’ve gone so far off the rails, their parents don’t know what to do with them anymore. This is wilderness therapy camp. Eight weeks of survivalist camping in the desert. Eight weeks to turn your life around. Yeah, right.

The Wren who arrives in the Utah desert is angry and bitter, and blaming everyone but herself. But angry can’t put up a tent. And bitter won’t start a fire. Wren’s going to have to admit she needs help if she’s going to survive.

“I read Wild Bird in one long mesmerized gulp. Wren will break your heart—and then mend it.” —Nancy Werlin, National Book Award finalist for The Rules of Survival

“Van Draanen’s Wren is real and relatable, and readers will root for her.” —VOYA, starred review

The author, Wendelin Van Draanen was born on January 6, 1965, in Chicago, Illinois. She is the daughter of chemists who emigrated from Holland. She worked as a math teacher and then as a computer science teacher before becoming an author. Wendelin Van Draanen began her writing career with a screenplay and soon switched to adult novels and then children’s books. She is best known for her Sammy Keyes series of novels, which she started writing in 1997, featuring a teenage detective named Samantha Keyes. Her popular Sammy Keyes series had been nominated four times for the Edgar Allan Poe Award for Best Children’s Mystery and won with “Sammy Keyes and the Hotel Thief”. Her Shredderman series also yielded a Christopher Medal for Secret Identity. She has also authored several novels such as: How I Survived Being a Girl and Flipped.